Kaaba in brief - What is it? what is inside it?

Meaning of Kaaba is cube in Arabic. Ka'aba is also known as Kaʿbah al-Musharrafa.

We Muslim face this when we offer our Salah or prayers. Its referred to as Qibla ( Direction of the prayers). Praying in the direction of Kaaba is for unity among Muslims.

Pilgrims who perform hajj or Umrah circumambulate (walk around ) the Kaaba 7 times to complete Tawaf.

Corners of the Kaaba 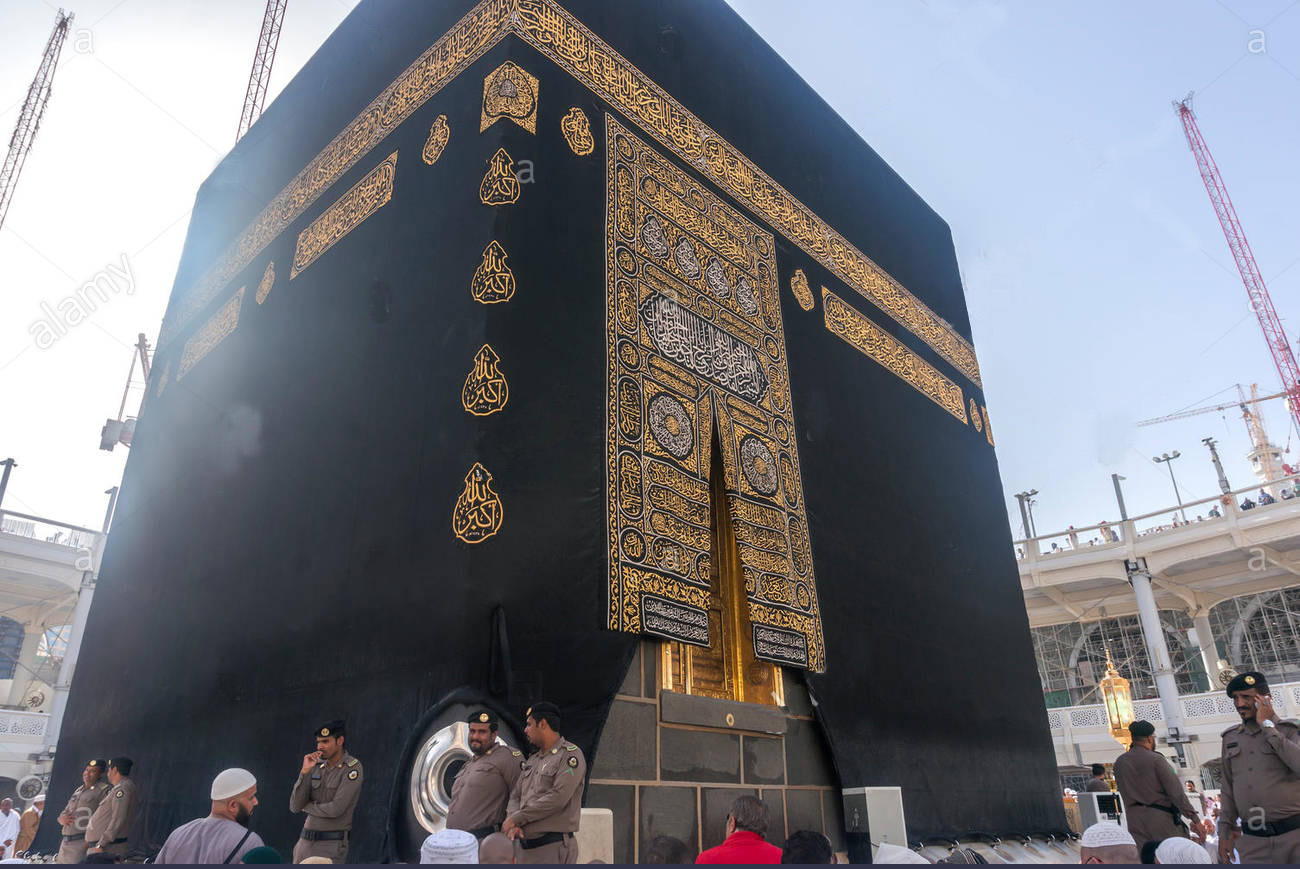 Hajr Al Aswad corner is the corner facing East. Its located at the left side of the Kaaba door. The corner where Hajr Al Aswad is placed in Kaaba. Tawaf starts and finishes from this corner.

The calligraphy on this corner is unique to recognize the Hajr Al Aswad corner from a far distance. 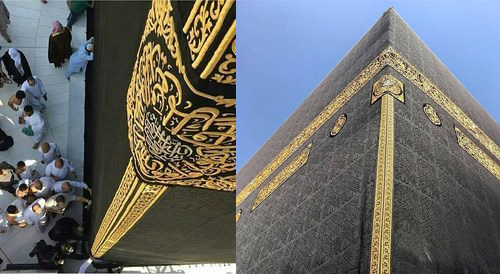 The yemani corner is facing south towards Yemen.

There is a unique embroidery on the Kaaba cloth so you could easily recognize from a distance. 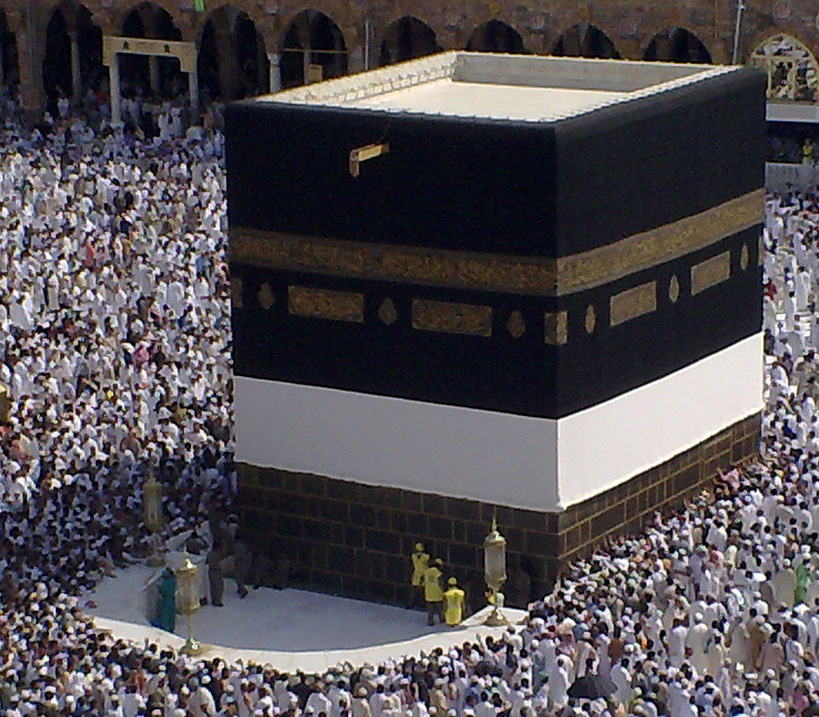 Shaam corner is facing Syria, which is known As Shaam. It is located at the beginning of the Haatim. Haatim is the semi-circle structure seen in the picture. It is also the next corner to the Hajr al Aswad corner and opposite to the Yemeni corner.

Iraqi corner is located at the end of the haatim. It is also the opposite corner to the Hajr al Aswad corner.

Kaaba - Names of its corners and key Areas 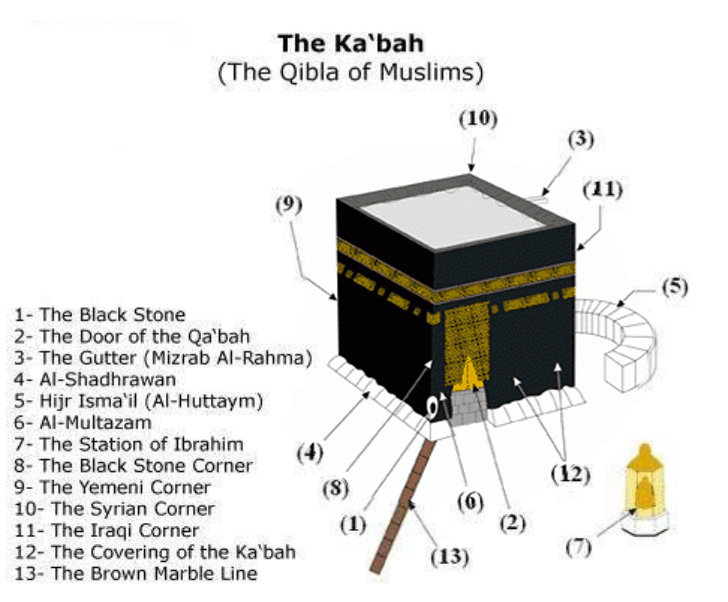 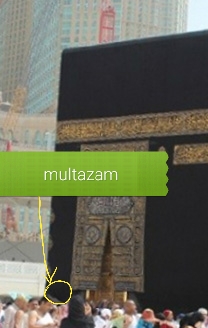 Multtazam is the Area between Hajr al Aswad corner and the Kaaba door. Multazam means the place of clinging. What is meant by iltizaam (clinging) is when the person making du’aa places his chest, face, forearms and palms against it and calls upon Allaah saying whatever du’aa he wishes.  Duas asked at this location has a high chance of acceptance. The hadiths which support this are founded weak by the scholars. 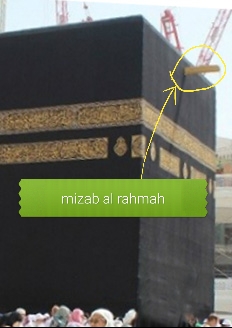 The gold rainwater spout is located on top of the Iraqi and Shaam corner is known as Meeezab or Mizab Al Rahmah. Also known as Mizab e Rahmah meaning water outlet of mercy. While there is a practice to ask dua in this area but he practice is not supported by hadiths.

Its a place where a brick/stone is kept with footprints of hazarat Ibrahim PBUH. When Ibrahim PBUH was constructing the Kaaba, he could not reach beyond his height. So he stood on this brick. This brick elevated Ibrahim PBUH and helped him complete the construction. They left his stone on the east side of the Kaaba. After the completion Ishmael PBUH and Ibrahim PBUH both offered nafls. After tawaf, we offer two rakaath nafl behind makaamu Ibrahim. 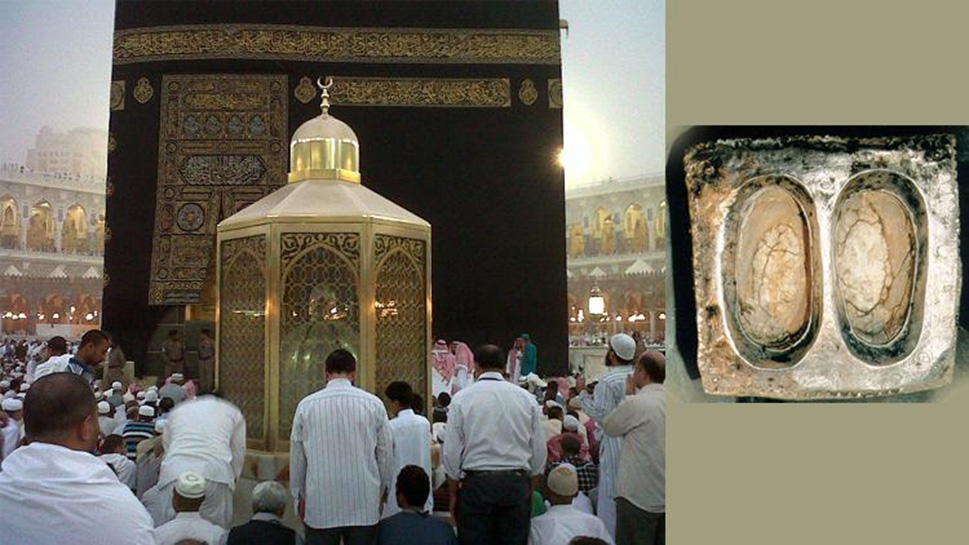 Stone of Ismael is also known as Hateem, Hajr Ismael, Hijr-Ismail. It is the semi-circular area in between Iraqi corner and the Shaam or Syria corner. This area is covered with the wall but not connected to Kaaba from both the ends. This Hateem was organically a part of Kaaba. Therefore, no one enters Hateem during tawaf. It was originally a part of Kaaba but when Quresh rebuilt kaaba, and they ran out of funds to restore it to its shape. A prayer offered in Haatim is equivalent to a prayer offered inside Kaaba. 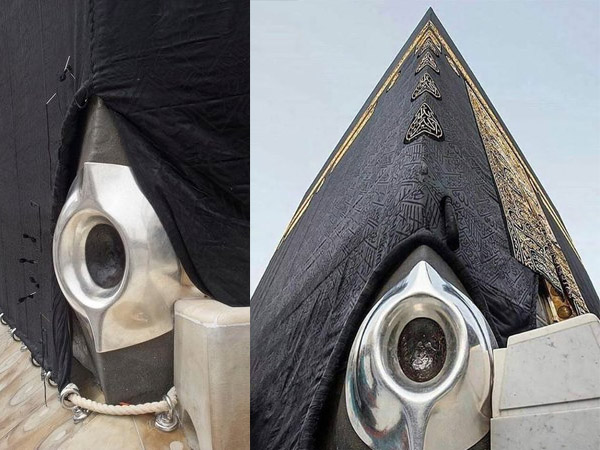 Hajr al Aswad or black stone Located at the Hajr Al Aswad corner. It was set there by Prophet Muhammad PBUH 5 years before the first revelation. Muslims consider the rock has been sent from heaven. The rock has been broken into pieces, but it's been cemented and kept inside the silver frame. While there is hadith to support prophet PBUH touched and kissed Hajr Al Aswad, there are no hadiths to support that touching or kissing Hajr Al Aswad erases the sin. Once Umar ibn Khattab rail Allahu Anhu said "No doubt, I know that you are a stone and can neither harm anyone nor benefit anyone. Had I not seen Allah's Messenger [Prophet Muhammad PBUH] kissing you, I would not have kissed you.

Kiswah is the black cloth covering the Kaaba. The fabric is changed every year on the 9th of Dhul hajj. It is to be noted the pilgrims will be in mount Arafat on 9th of Dhul hajj. The removed Kiswah would be cut into small pieces and gifted to the Muslim delegates and diplomats around the world.

Mataf area is a place where people perform Tawaf. it is the Area around Kaaba. Haatim is not part of the Mataf Area since it is considered as a part of the Kaaba. Now the Mataf Area has extended, and it has three additional floors to accommodate more pilgrims.

What is inside Kaaba?

Kaaba is a mosque. It is a simple structure. It has three columns and a table inside. There are lanterns like lamps attached to the ceiling in line with the ceiling. There is nothing else.

See the google street maps for what's inside Kaaba.

The reason for its being closed is that it cannot accommodate the Umrah crowd inside the Kaaba. It can only accommodate 50 at a time.

The Architecture of Kaaba

As for the Islamic scholars, Kaaba was initially built without a roof. It's during the time of Qureshi they build it with a roof.

During the time of Prophet Mohammad (PBUH), Qureshi tribes decided to rebuilt Kaaba. The Qur'an was not yet revealed to the prophet at this time. When they were to determine which tribe leader to carry and place the Hajr Al Aswad in the Kaaba, they disputed among themselves, and they even consider to fight one another. And one wise man advised all the tribe leaders to ask the first person who visits Kaaba in the dawn. It was our beloved prophet who came first in the morning to Kaaba. They Qureshi was happy because the prophet was known for his truthfulness and his trustworthy. They asked the prophet, and he advised to take a cloth put the Blackstone in, and every tribe leaders hold one side of the cloth. The Qureshi tribes agreed.

The Qureshi's could not finish the Kaaba due to a shortage of funds. That's why still Haatim or Hajr e Ismail is not built together with Kaaba though it is a part of Kaaba.

Allah mention about Kaaba as the first house of worship. Some scholars say it was a place of worship for angels before the creation of humankind. Adam and Eve first built it ( may peace be upon both of them). After destruction by flood during prophet Noah or nuh ( may peace be upon him) Abraham (Ibrahim)  and Ismael (may peace be upon both of them) rebuilt it again to obey Allah's order. It was rebuilt after that several times after that to bring it to the shape of it today. While Abraham was building the Kaaba, an angel brought Hajr al Aswad to him the by but which he placed in the eastern corner of the structure. Another stone was the Maqam-e-Ibrahim (literally the Station of Abraham) where Abraham stood for elevation while building the structure

Why did Ibrahim ( may peace be upon him) build Kaaba?

Because Allah ordered him to do so, Ibrahim PBUH is a prophet of Allah.

In the Quran in Surat Al fil. Allah mentions a king called Abraha attacked the city of Makkah and came to destroy the holy Kaaba. The Qureshi Makkans had no equal force to fight Abrahas Eliphantry with more than 60000 strength. Allah sends a Glock birds which picked burning stones and dropped them on the elephants. And destroy the force before they reach Kaaba. This year was known as the year if elephants. Our beloved prophet was born in this year

Allah ordered Ibrahim and Ishmael ( may peace be upon both of them) to build Kaaba and worship Allah alone and perform pilgrim and perform Qurban (sacrifice) to Thier progeny. But after a few generations, they involved idol worship. It was mentioned there were more 360 idols inside and outside Kaaba. When Muslim conquest Makkah prophet (may be upon him) ordered to destroy all idols and pictures.

Is Kaaba at the centre of the earth?

Since the world is in a sphere shape, it's not possible to find the centre of the earth. Though vertically it's almost in the middle. When we consider Japan as the east corner, and if America is the West corner, the Kaaba might fall in the centre.

Qibla is the point where Muslims turn towards when they offer their prayers to Allah.

When Allah Subhanawu tha'ala granted prayers as a gift, he instructed us to face masjid Al Aqsa. Later during the Madinah period, Allah commanded to change the direction to Kaaba. From then onwards we pray, facing the Kaaba.

Verily, the first House (of worship) appointed for mankind was that at Bakkah (Makkah), full of blessing, and a guidance for mankind.

And remember Ibrahim and Ishmael raised the foundations of the House (With this prayer): "Our Lord! Accept (this service) from us: For Thou art the All-Hearing, the All-knowing.

— Quran, Chapter 2 (Al Bakarah) verse 127
[
Remember We made the House a place of assembly for men and a place of safety; and take ye the station of Abraham as a place of prayer; and We covenanted with Abraham and Isma'il, that they should sanctify My House for those who compass it round, or use it as a retreat, or bow, or prostrate themselves (therein in prayer). (Surah Al-Baqara, 125)

The first House (of worship) appointed for men was that at Bakka: Full of blessing and of guidance for all kinds of beings: (Surah Al-Imran, 96)

In it are Signs Manifest; (for example), the Station of Abraham; whoever enters it attains security; Pilgrimage thereto is a duty men owe to Allah,- those who can afford the journey; but if any deny faith, Allah stands not in need of any of His creatures. (Surah Al-Imran, 97)

Allah made the Ka'ba, the Sacred House, an asylum of security for men, as also the Sacred Months, the animals for offerings, and the garlands that mark them: That ye may know that Allah hath knowledge of what is in the heavens and on earth and that Allah is well acquainted with all things. (Surah Al-Ma’ida, 97)

Behold! We gave the site, to Abraham, of the (Sacred) House, (saying): "Associate not anything (in worship) with Me; and sanctify My House for those who compass it round, or stand up, or bow, or prostrate themselves (therein in prayer). (Surah Al-Hajj, 26)

Aisha rali Allahu anhu reports that when she asked the Prophet whether the Hateem was part of the Ka’bah, he replied that it was. When she further asked why it was then not included in the walls of the Ka’bah, the Prophet replied, “Because your people (the Quraysh) did not have sufficient funds.” [Bukhari] Aisha says, “When I expressed the wish to perform salah within the Ka’bah, the Prophet took me by the hand and led me into the Hijr (Hateem) where he said, ‘Perform salah here if you wish to enter the Ka’bah because this is part of the Baytullah.’”