Mount Uhud and the Site of the battle

Mount of Uhud is located in the north of Madinah (Medina), Saudi Arabia. Jabel Uhud in Arabic means Mount Uhud. It is the place where the battle of Uhud took place. Prophet Muhammad PBUH and his followers loved Uhud mountain, and Uhud mountain loved the Muslims. Our Prophet made (the area) in between these two mountains (of Medina) a sanctuary. Therefore do not kill any animals or harm them. Do not damage the trees.

Mount Uhud is also compared to one Qirat. Qirat is a measurement of rewards for good deeds. 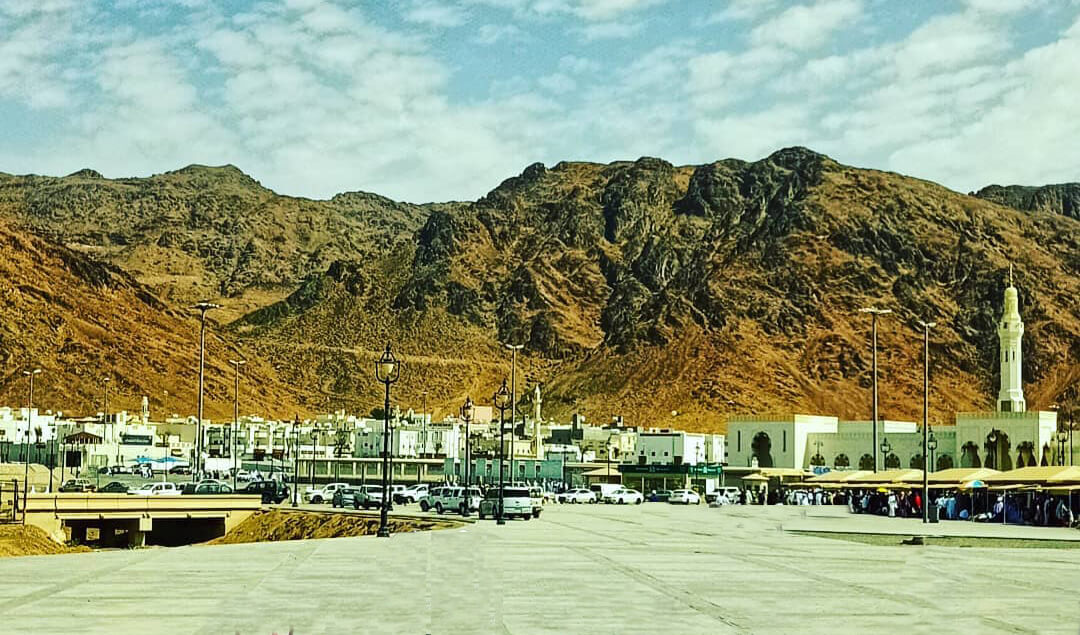 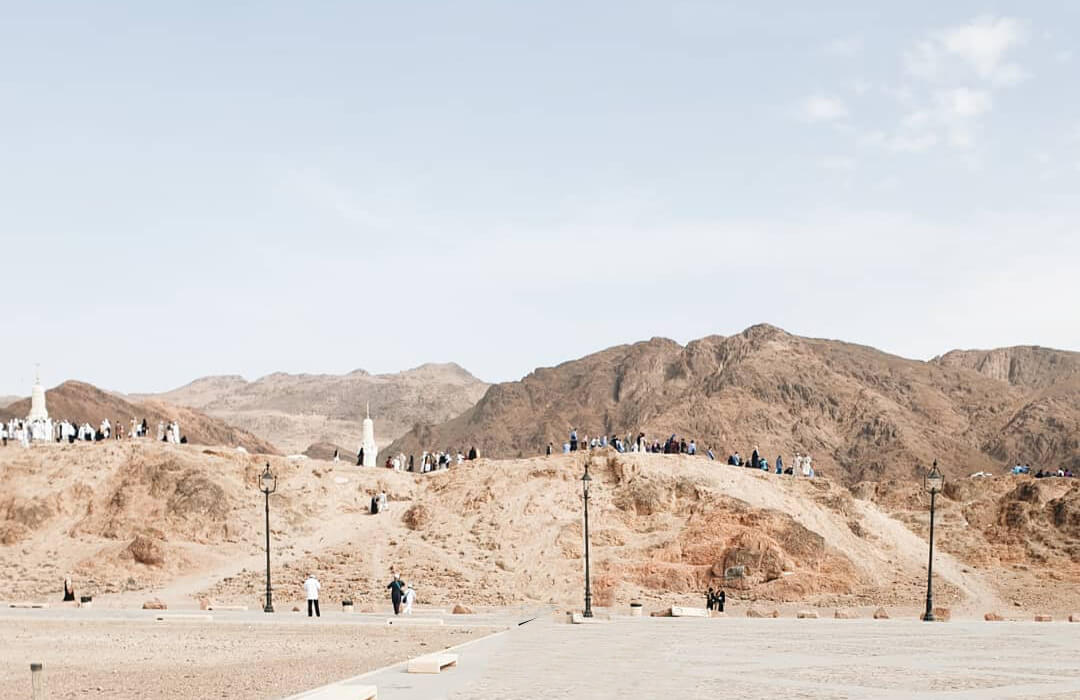 History of the Mount Uhud

The general battle started the Meccan Calvary men tried to run over the Muslim flanks, but the archers negated them. It gave the Muslims a great advantage to pierce through the enemy's line.

However When the Meccan flee Muslim archers thought its the victory and came down to collect to the bounty. This act was against the order of the Prophet pbuh.

Khalid bin Walid raliallahu anhu was not yet a Muslim at the time was in the Meccans camp. He saw the archers were down and went to the hill to attack the rest of the archers which made the Muslim flank vulnerable.

The Meccans advanced, and they attacked manage to kill many Muslims and attacked our beloved Prophet. Prophet Muhammad Pbuh was injured during this battle.

Muslims again regrouped at the slope of the hill and defended against the disbelievers. The Meccans couldn’t ascend the mountain and breakthrough.

Though Meccans left to Makkah after this, Muslims suffered a major loss in the battle. It’s due to disobeying the command of our beloved Prophet.

Muslims suffered more the 60 deaths while Meccans only lost less than 35. 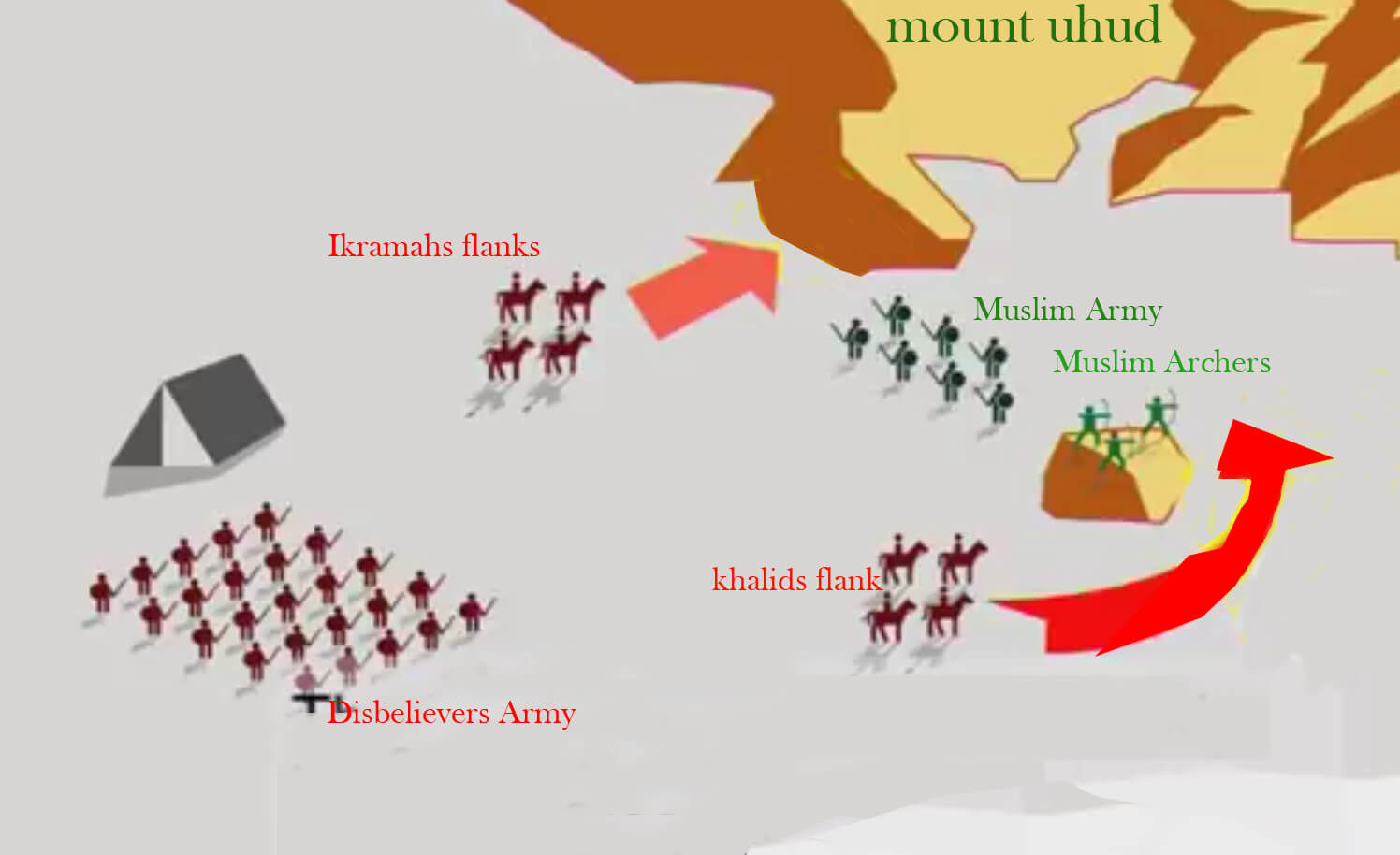 When Muhammad pbuh ascended the Mount Uhud, Abu Bakr, Umar and Uthman accompanied him. The mountain shook beneath them. Muhammad pbuh then hit it with his foot and said, “O Uhud ! Be firm, for, upon you, there is none but a Prophet, a supporter of truth and two martyrs.

It is to noted Umar rali and Uthman both were martyrs. While Abubakr rali passed away naturally and he was called as the Siddique meaning a truthful.

Mount Uhud cave or the cave of Uhud

Uhud cave is A naturally formed cave located at the Uhud mountains. It’s on the side of the mount Uhud which faces the Masjid Al Nabawi. Uhud cave is where prophet Muhammad Pbuh took refuge after he was wounded in the battle of Uhud. He was carried there by Talha rali Allahu Anhu.

Lessons of the battle of Uhud

Beloved Prophet Muhammad (ﷺ) ordered Muslim archers not to leave their position under any circumstance. But they left the position which weakened the Muslim archers unit and allowed Meccans to get behind the mountain and attack the Muslims from front and back.

Note the Muslims were at an Advancing position till the archers come down. So disobeying the Prophet (ﷺ) gave the Muslims a defeat and loss.

And why did they disobey? they went to get the booty. This denotes the worldly bounties. So disobeying our Prophet PBUH  for worldly bounties would disunite the Muslims, make us weak and give us defeat.

While that was the primary lesson, there are other lessons, as well.

If you decide on something stay firm on it and trust Allah, Allah will give you courage and strengthen your heart.

We must obey Allah’s command over any worldly matters even though it’s for family.

(3:121) (O Messenger! Remind the Muslims of the occasion) when you went forth from your home at early dawn (to the battlefield of Uhud) and placed the believers in battle arrays. Allah is All-Hearing, All-Knowing.
(3:122) And recall when two groups from among you were inclined to flag although Allah was their protector; it is in Allah that the believers should put their trust.
(3:123) For sure Allah helped you at Badr when you were utterly weak. Beware, then, of Allah; perhaps you will be thankful.

That the Messenger of Allah (ﷺ), Abu Bakr, ‘Umar, and ‘Uthman climbed Uhud (mountain) and it shook them, so the Prophet of Allah (ﷺ) said: “Be firm O Uhud! For there is none upon you except a Prophet, a Siddiq, and two martyrs.”

When the mountain of Uhud came in the sight of Allah’s Messenger (ﷺ) he said. “This is a mountain that loves us and is loved by us. O, Allah! Abraham made Mecca a sanctuary, and I make (the area) in between these two mountains (of Medina) a sanctuary.”

“The Prophet liked to perform Salat in Al-Hitan.” weak hadith.
The Prophet (ﷺ) buried every two martyrs in of Uhud in one grave.

The martyrs of Uhud were not washed, and they were buried with their blood. They did not offer the funeral prayers over them.

Allah’s Messenger (ﷺ) said, “If I had gold equal to the mountain of Uhud, it would not please me that it should remain with me for more than three days, except an amount which I would keep for repaying debts.”

“Indeed a disbeliever’s skin will be forty-two forearm lengths thick, his molar teeth will be like Uhud (mountain), and his sitting place in Hell will be like what is between Makkah and Al-Madinah.” weak.

A companion saw, Talha’s (may Allah be pleased with him) paralyzed hand with which he had protected the Prophet (ﷺ) on the day of Uhud.

Allah’s Messenger (ﷺ) said, “There are angels at the mountain passes of Medina (so that) neither plague nor Ad-Dajjal can enter it.’

The Prophet (ﷺ) prayed over the martyrs of Uhud after eight years like a man who bids farewell to the living and dead.
Hazrat Saa’ib bin Yazeed radiyallahu anhu says, “In the Battle of Uhud the Prophet of Allah sallallahu alaihi wasallam wore two suits of armour. He wore one over the other.

The Prophet (ﷺ) said, “Do not abuse my companions for if any one of you spent gold equal to Uhud (in Allah’s Cause) it would not be equal to a Mud or even a half Mud spent by one of them.”

mount uhud graveyard and martyrs of the battle

There are around 60 companions, of Prophet Muhammad PBUH were buried at this place. Hamza ibn Abu Muthalif ( prophet Muhammads PBUHs' uncle) and Mus'ab Rali Allahu anhu are the most known companions who were martyred in the battle.

A black slave killed hamza raliallahu anhu with his spear. And heart body was cut, and the liver was taken out and chewed by a woman named Hind to revenge her fathers' death in the previous battle, The battle of Badr.

Mus'ab raliallahu Anhu held the flag of the Muslims. The enemy cut the hand which held the flag. So Mus'ab raliallahu anhu held it with the other hand. Then they cut his other hand too. So held it with the part of his bleeding hand against is his chest. They killed him with an arrow. So another Muslim took over the flag. At the time of his burial, he had only a piece of a sheet which is short to cover his whole body. So the Prophet asked to cover his head with the cloth and his feet with the Azkhar leaves.